In the last two weeks we launched two content products that helped us acquire more than 3000 e-mail addresses.<...>

The two products that we launched are:

Both of these products are part of our greater content and marketing strategy with the ultimate goal being to generate leads and signups for Receiptful itself. The challenge in kickstarting such a strategy is always finding the first traction.

With so much great content out there already, it's not just a case of "produce great content and they will come". Instead it often ends up being a very lonely echo chamber at the start.

The irony in this is that once you've found signed up the first (say) 100 subscribers to your list, it's much easier to grow that list (with new content and products), because you have a foundation from where at least some of those subscribers will help you out.

Receiptful started with a very small mailing of about 350 subscribers, which we acquired via our beta landing page in the months before launching. The challenge with that list though was two-fold:

So how did we kickstart our mailing list? Well - with a lot of help from Product Hunt and a little bit of "creative leverage" on our part. :)

First, let's look at how the two products have performed:

The vast majority of traffic and signups happened in the first five days after which it quickly declined to a handful a day:

It's also interesting how all three of those metrics actually correlate pretty accurately over the first five days:

Having had products on Product Hunt before, I knew that I should try give the listing a bit of an upwards push to spark that snowball effect. From my side, I thus did two things to help with this:

This time around the vast amount of traffic and signups happened in the first three days before tapering off (even though the "long tail" traffic since is still hovering on 60 to 90 uniques a day, a week later):

And again the metrics are highly correlated and relative: 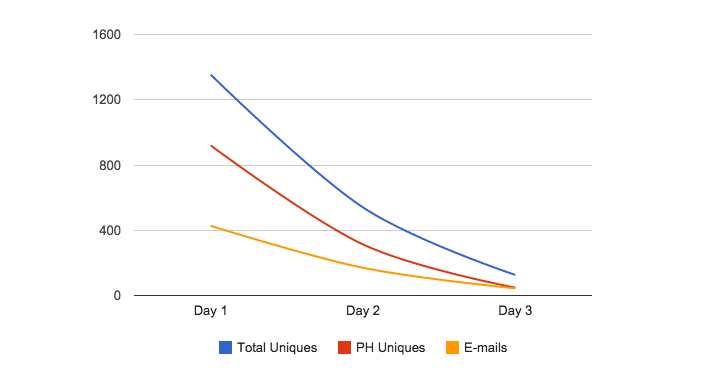 I wanted to follow the same approach I did with the e-book, where I'd leverage my personal mailing list, but it didn't feel right this time. I didn't have anything to offer my subscribers (they would have to subscribe to another mailing list) and it felt a little demanding asking for another favour in the space of a little more than a week. Instead this is what I did:

What Did I Learn?

My biggest takeway is that you simply have to do your bit to make your listing on Product Hunt a success. In my case, I used my pre-existing Twitter audience and newsletter to give the listing a boost. Once you get that boost, the reward is exponential and outsized.

In that sense, I also regret to having used the mailing list from the e-book to promote ToughChit and especially our Product Hunt listing. I suspect that if I had asked for a favour (to upvote the listing), we could've 2x / 3x'ed the amount of e-mail subscribers we gained. That said, I didn't want to overwhelm new subscribers so early and taint their perception of Receiptful.

Next up, we now need to figure out how to get some of these subscribers to actually use Receiptful or how we can create more content that they would be happy to help us distribute (to ultimately put more leads into the top of the funnel).